On This Date in Minnesota History: February 9

February 9, 1984 – Marjorie Congdon Caldwell Hagen was sentenced “to two years and seven months in prison and fined $10,000 for setting fire to her former home [in Mound, Minn., on September 15, 1982] and then trying to collect insurance on it.” 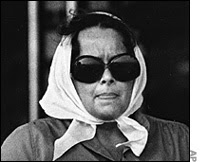 On This Date in Minnesota History: February 8

February 8, 1858 – “The fossil remains of a mastodon were discovered by a work crew excavating Myrtle Street [in Stillwater, Minn.] The tusks were found about eight to ten feet above the base of the hill of Myrtle Street and 36 feet below the ground.” 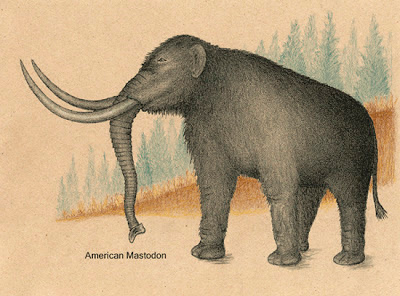 On This Date in Minnesota History: February 7

February 7, 1980 – Brainerd Water and Light Superintendent Elmer Lalli flicked a switch to fluoridate Brainerd's water after a nearly 30-year fight against such action. Brainerd was the last holdout city not complying with a 1967 state law mandating fluoridation in cities of a certain population. In October of 1979, five Brainerd City Council members were found to be in contempt of court and ordered to pay fines of $250 a day for their refusal to comply.  The City Council finally caved in to pressure from the state and the court system on this date.
http://www.fluoridealert.org/Alert/United-States/Minnesota/Brainerd---Fluoride-battle,-20-years-later.aspx 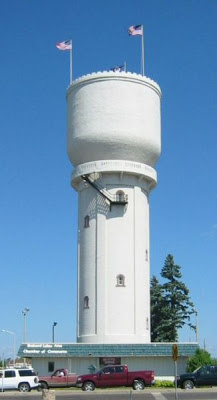 On This Date in Minnesota History: February 6

February 6, 1946 – This morning The Dayton Company unlocked their vault where they had been storing pairs of nylons since November 1, 1945. The store’s board of directors had resolved “that no pair of nylons would be sold to anyone, not even to wives of officers and directors until a sufficient supply had been stocked to answer the demand.” The company announced that over the next three days, 60,000 pairs of nylons would be available for sale: 20,000 on this date (Wednesday), 20,000 on Thursday, and 20,000 on Friday.1

Crowds estimated at 13,000 “began to gather at 6:30 a.m. despite a heavy snowfall. The 20,000 pairs of hose allotted by the company to be sold two to a customer on Wednesday were gone by 1 p.m.” Twenty-one police officers and eight firemen were detailed to work with the crowd. Police Sergeant Jack McLaughlin looked exhausted, according to the Minneapolis Morning Tribune, “and said he would have rather been assigned to capture George Sitts” (a murderer that had escaped from the Hennepin County jail 17 days earlier and had been trailed to and found in Latrona County, Wyoming). Fire Chief Arthur Spotwood said, “This is much worse than firefighting, but there’s plenty of heat here too.”2

Possibly adding to the crowd’s hysteria was an article on the front page of Wednesday’s paper where the president of the National Association of Hosiery Manufacturers announced that 1946 women’s hosiery production would approximate at most 10 pairs per woman, as opposed to an average of 14 pairs per woman a year before the war.3 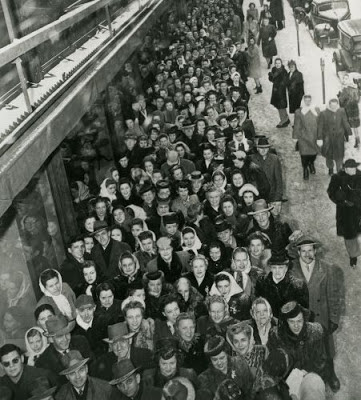 Line to get into Dayton's to buy hosiery

On This Date in Minnesota History: February 5

February 5, 1924 - The Milford Mine on the Cuyuna Range (Crow Wing County) was the location of the worst mining disaster in Minn. A new tunnel was blasted too close to nearby Foley Lake, and water rushed in, killing 41 miners.  A memorial for miners killed on the Cuyuna Range in Ironton, Minn., includes the names of the 41 victims of the Milford Mine disaster.
http://en.wikipedia.org/wiki/Cuyuna_Range 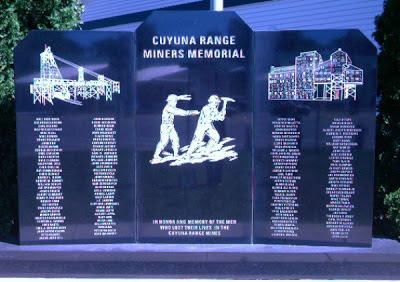 On This Date in Minnesota History: February 4

February 4, 1902 - Charles Augustus Lindbergh was born on this date in Detroit, Mich., but spent most of his childhood in Little Falls, Minn., and Washington, D.C.
http://en.wikipedia.org/wiki/Charles_Lindbergh 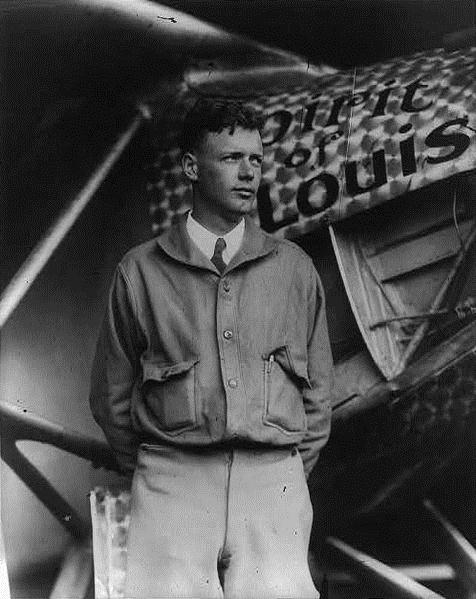 
Posted by On This Date in Minnesota History at 6:00 PM No comments:

On This Date in Minnesota History: February 3

February 3, 2008 – Minn. Gov. Tim Pawlenty declared this day, February 3, Immortal Four Chaplains Day in accordance with Minnesota Statutes 10.56 which designates the day in honor of four United States Army chaplains, George L. Fox, Alexander D. Goode, Clark V. Poling, and John P. Washington, who sacrificed their lives to save the lives of other service personnel while serving on the U.S.S. Dorchester, a United States Army troop transport that was sunk off the coast of Greenland on February 3, 1943.

The following is the text of the Governor’s official proclamation:

WHEREAS: February 3, 2008, is the 65th anniversary of the tragic sinking of the United States Army transport DORCHESTER off the coast of Greenland, an event that resulted in the loss of nearly 700 lives in 1943. Witnesses of the event have recounted in the Congressional Record the heroism and self-sacrifice of four chaplains of different faiths: Lt. George L. Fox, Methodist; Lt. Alexander D. Goode, Jewish; Lt. John P. Washington, Catholic; and Lt. Clark V. Poling, Dutch Reformed; and

WHEREAS: Witnesses have verified that during the approximate 18 minutes the ship was sinking after being torpedoed, the four chaplains went from soldier to soldier calming fears and handing out lifejackets while guiding men to safety. When there were no more life jackets to give, they removed their own and gave them to others to save their lives. The chaplains were last seen arm-in-arm in prayer on the ship’s hull; and

WHEREAS: Many of the 230 men who survived owed their lives to these four chaplains. Their unique interfaith spirit and love for their fellowmen was memorialized by the United States Postal Service on a popular 1948 postage stamp with the title: “These Immortal Chaplains – Interfaith in Action”; and

WHEREAS: Congress in 1957 passed a Concurrent Resolution to honor these Immortal Chaplains and the men who died with them, and Presidents Truman and Eisenhower issued similar proclamations calling for national recognition and participation in memorial services throughout the land to be, observed annually by the American Legion and others on the first Sunday in February; and

WHEREAS: Congress created a special Medal of Valor in memory of the four chaplains in 1960, never to be repeated. The United States did pass a unanimous resolution on the first day of the 2nd Session of the 105th Congress, January 27, 1998, designating February 3 as “Four Chaplains Day,” which was co-authored by U.S. Senator Rod Grams, of Minnesota, and a similar bill passed unanimously in the Minnesota State Legislature at that same time; and

WHEREAS: The first Sunday in February is recognized nationally by many congregations and by the American Legion as “Four Chaplains Sunday,” and the historic Fort Snelling Memorial Chapel has a permanent memorial in stained glass depicting the compassion of the Four Chaplains and has commemorated this memorial service for decades.

NOW, THEREFORE, I, TIM PAWLENTY, Governor of the State of Minnesota, do hereby proclaim that Sunday, February 3, 2008, shall be observed as: IMMORTAL FOUR CHAPLAINS DAY in the State of Minnesota as an example of compassion for those of different race or faith, and that flags on State office buildings shall be flown at half-staff in honor of this day. 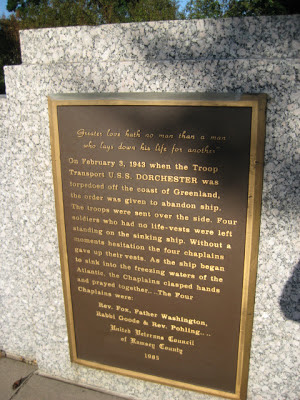 Greatest love hath no man than a man who lays down his life for another.

On February 3, 1943 when the Troop Transport U.S.S. DORCHESTER was torpedoed off the coast of Greenland, the order was given to abandon ship. The troops were sent over the side. Four soldiers with no life-vests were left standing on the sinking ship. Without a moments hesitation the four chaplains gave up their vests. As the ship began to sink into the freezing waters of the Atlantic, the Chaplains clasped hands and prayed together…