On This Date in Minnesota History: March 16

I am basically a quarter Finn (my paternal grandmother was 100% Finn). I have taken DNA tests for genealogical purposes in the hopes of finding relatives in Finland and Sweden who can give me more info on my great-grandparents’ families. One test said I am 22% Finn, the other one said I am 16% Finn. Close enough.

Celebrating St. Urho’s Day is so much fun, mainly because non-Finns look at you like your crazy; most of them don’t even know what you’re talking about. For those of you unfamiliar with St. Urho, here’s the 411:

Though the actual date the story of Finland’s patron saint, St. Urho, was conceived is not clear, it is believed the first annual celebration was held on this date.

Richard Mattson, who worked at Ketola's Department Store in Virginia, Minn., is credited with coming up with the idea of the Finnish saint.  He once wrote “about how he created St. Urho: ‘Winters are long and cold in Virginia, Minnesota, on the Iron Range. Gene McCavic, a co-worker at Ketola's Department Store, chided me in 1953 that the Finns did not have saints like St. Patrick. I told her the Irish aren't the only ones with great saints. She asked me to name one for the Finns. So I fabricated a story and thought of St. Eero (Eric), St. Jussi (John), and St. Urho. Urho, a common Finnish named, had a more commanding sound.’'

So Mattson told McCavic the Finns had a St. Urho. And to save the grape crop, he chased all the poisonous frogs from Finland before the last Ice Age. Never mind that grapes never grew in Finland -- this is legend.”

“The fame of St. Urho, who drove frogs from Finland and saved the grape crop, has spread far and wide, even across the sea to Finland where there's more than one St. Urho's Pub. There's a St. Urho's statue in Menahga, Minn., and one in Finland, Minn., and the Helsinki Bar in Butte, Mont., has a St. Urho's celebration. Mattson's wish that St. Urho and the wearing of the purple and green would live on [has been] fulfilled.” http://www.sainturho.com/ 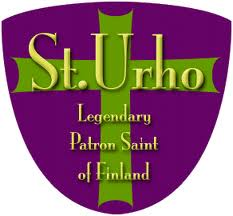 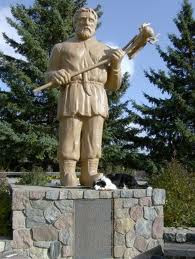 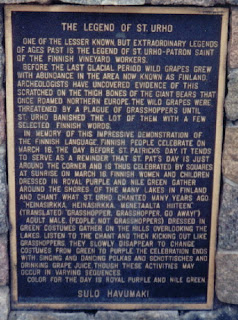 Plaque on Statue
THE LEGEND OF ST. URHO

One of the lesser known, but extraordinary legends of ages past is the legend of St. Urho-Patron Saint of the Finnish vineyard workers.

Before the last glacial period wild grapes grew with abundance in the area now known as Finland. Archaeologists have uncovered evidence of this scratched on the thigh bones of the giant bears that once roamed northern Europe. The wild grapes were threatened by a plague of grasshoppers until St. Urho banished the lot of them with a few selected Finnish words.

In memory of this impressive demonstration of the Finnish language, Finnish people celebrate on March 16, the day before St. Patrick's Day. It tends to serve as a reminder that St. Pat's day is just around the corner and is thus celebrated by squares at sunrise on March 16. Finnish women and children dressed in royal purple and nile green gather around the shores of the many lakes in Finland and chant what St. Urho chanted many years ago.

Adult male, (people, not grasshoppers) dressed in green costumes gather on the hills overlooking the lakes, listen to the chant and then kicking out like grasshoppers, they slowly disappear to change costumes from green to purple. The celebration ends with singing and dancing polkas and schottisches and drinking grape juice, though these activities may occur in varying sequences.

Color for the day is royal purple and nile green.
SULO HAVUMAKIhttp://firespeaker.org/misc/urho.html

On This Date in Minnesota History: March 15


March 15, 1941 – “A fast-moving and severe blizzard hits North Dakota and Minnesota, killing 151 people, on this day in 1941. Weather forecasting and reporting made important advances following this disaster that would have prevented the loss of life that occurred due to the sudden storm.

The people of North Dakota and northern Minnesota had nearly no warning of the blizzard that swept in suddenly from the west on March 15. In some locations, temperatures dropped 20 degrees in less than 15 minutes. Fifty-mile-per-hour sustained winds (with gusts reaching 85 mph in Grand Forks and 75 mph in Duluth) brought blinding snow and huge 7-foot-high snow drifts across the states.

Most of the victims of the blizzard were traveling in their cars when it hit. Highway 2, running from Duluth, Minnesota, to North Dakota, was shut down, as were Highways 75 and 81. Attempts to rescue those stranded in their cars came too late. In one incident, six-year-old Wilbert Treichel died from exposure to the cold as his parents attempted to carry him through the blizzard to safety.

Two thousand people attending a basketball game in Moorhead, Minnesota, were stranded at the arena overnight when it was wisely decided that travel was too dangerous. Theaters, hotels and stores across the region were also forced to stay open through the night because so many people had visited them, unaware that a major storm was approaching. Although the storm was also severe in Manitoba, Canada, only seven people there died because the population was much better prepared for the storm and for dangerous weather in general.

In the aftermath of this blizzard, weathermen in North Dakota and Minnesota--who had been under the control of the Chicago meteorology office, which was more concerned with local weather concerns and paid less attention to events occurring to the north--were allowed autonomy in their reporting. Protected with new technological advances in the wake of the disaster, area residents hoped they would never again be so blind-sided by a winter storm.” 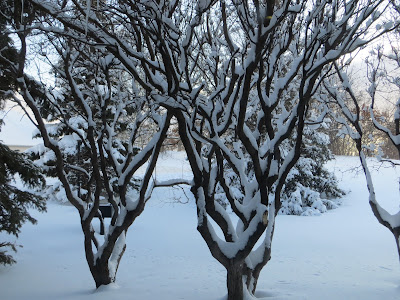 On This Date in Minnesota History: March 14

March 14, 1967 – James M. Savage, 16, pleads guilty to second-degree murder in the fatal stabbing of Kathleen Bodie, 14, in the Cloquet High School band room on Nov. 17, 1966. “The youngster said he had no feeling of animosity toward the girl and that he was motivated by an overwhelming urge to commit the act. District judge Mitchell Dubow sentenced [Savage] to an indeterminate term not to exceed 40 years.”

On This Date in Minnesota History: March 13

On This Date in Minnesota History: March 12

March 12, 1958 – “Cincinnati Royals player Maurice Stokes, in a game against the Lakers at [the] Minneapolis Auditorium, falls hard on a drive to the basket. Days later, Stokes loses consciousness and falls into a coma for weeks. He is left a quadriplegic after being diagnosed with post-traumatic encephalopathy.”1
“Stokes suffered a long-term effects the remainder of his life and succumbed from a heart attack on April 6th, 1970. He was inducted posthumously into the Naismith Memorial Basketball Hall of Fame in 2004.”2
1http://www.minnpost.com/politics-policy/2008/07/part-2-150-minnesota-moments-wed-just-soon-forget
2http://www.findagrave.com/cgi-bin/fg.cgi?page=gr&GRid=7792486 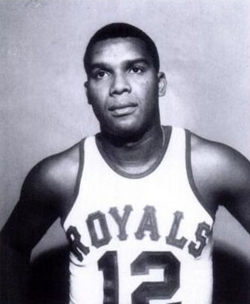 On This Date in Minnesota History: March 11

March 11, 1971 – Butler Square, a brick wholesale warehouse and office building designed by Harry Wild Jones in Gothic Revival style, was placed on the National Record of Historic Places on this date.1

“It was originally built [in 1906–08] as a warehouse for Butler Brothers, a mail-order firm. It had rather heavy construction in keeping with its function as a warehouse, featuring thick interior masonry walls with thin, recessed windows topped by corbelled parapets. The interior is built with heavy timber posts and beams, cut from Douglas fir grown near Aitkin, [Minn]. The columns are 24 inches wide at the bottom level, gradually diminishing to 9 inches wide on the top level. The basement included a horse stable, to accommodate deliveries, and the building had three large coal-fired boilers for heating.

Mechanical elevators were used to move goods throughout the building. The building had a rail spur to facilitate boxcar loading. Gradually, as truck transportation became more competitive with rail transportation, the urban location of the building rendered it inefficient as a warehouse.

In 1972, real estate developer Charles Coyer purchased the building with plans to rebuild the east half of the building as an office-retail complex. As part of the renovation, a central atrium was built to allow natural light into the building. This made the retail and office space more marketable, since the large floor space and small windows made it difficult to get enough natural light into the interior. James H. Binger purchased the building in 1979 with similar plans to develop the west half of the building. The atrium on that side was built with more of the heavy timber construction exposed, and more efficient mechanical systems were installed. The renovation of the building has served as a catalyst for additional development and preservation within the Minneapolis Warehouse District.”2 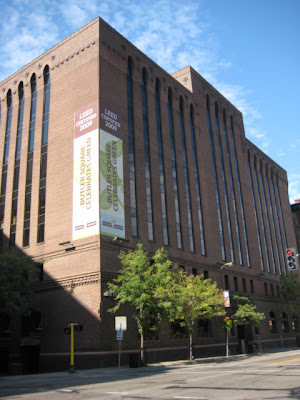 On This Date in Minnesota History: March 10


March 10, 1982 – The Jukola Boardinghouse in Virginia, Minn., was put on the National Register of Historic Places on this date. A frame residential building, it was constructed in 1912 to house unmarried miners.1

“The building had huge kitchens, a big dining room, sitting rooms, a ladies' parlor, and sleeping quarters for a hundred men. During its busiest period, Jukola used to serve meals to 450 persons daily in its [dining room] and was known for its excellent food. Drinking and [card playing] were strictly forbidden on the premises. During 1915-17, Jukola also operated its own grocery store in basement quarters in the building, with the storekeeper being Leo Saari, widely known in the cooperative movement in Virginia.

The residents of the hall were mostly workers in the mines or the sawmills. Most of them also belonged to the Workingmen's Association and were active participants in the Opera activities, and they were also the ones who were most ready to furnish loans to the Association when the Opera was being built. When they were not at the Opera, the young men used to crowd into the big [living room] of Jukola and talk and discuss and argue, and there was always action and bustle from early morning until late at night.”2 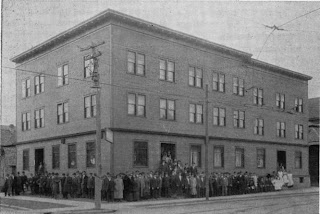 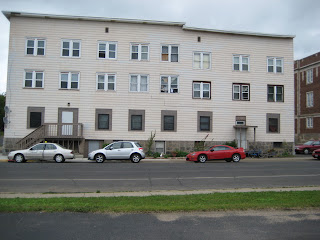