On This Date in Minnesota History: November 2

November 2, 1986 – Minneapolis Police Department Sergeant David “Mack succumbed to a gunshot wound received while serving a warrant at a house on Pillsbury Avenue South on December 13, 1979. Although the officers identified themselves several times the suspect claimed he shot in self-defense. Sergeant Mack was struck several times. He remained in a coma for two years before emerging from it. He remained a quadriplegic until his death seven years after the incident as a result of infections related to the wounds. The suspect was never charged with the murder. Officer Mack was survived by his wife and two sons.”

Posted by On This Date in Minnesota History at 6:00 AM 1 comment:

On This Date in Minnesota History: November 1

November 1, 1986 – The heart and lungs of a 21-year-old cheerleader from North Dakota State University–Fargo were transplanted into a 33-year-old woman from Moorhead, Minn. at the University of Minnesota Hospital. It was the state’s second heart-lung transplant. The recipient, Delores Selidan, “was born with Eisenmenger’s syndrome, a severe heart defect that allows oxygen-poor blue blood to bypass the lungs, reducing the flow of oxygen-rich blood to the rest of the body.” The donor, Janis Thompson, lost her balance and fell during a dismount from the top of a pyramid during cheerleading practice and landed on her head. She was declared brain dead on Friday, October 31.

After sitting behind a desk staring at a computer (or typewriter) for most of my working life, this past Christmas I decided to make some extra money by working as a seasonal cashier for one of the national big box stores.


Weeks of standing, scanning and bagging during the busiest time of the year gave rise to sore feet, back aches and several suggestions. Besides discovering the importance of good shoes and timing bathroom breaks, I recognized five ways you can help your cashier help you that I would like to share.


1. Always make sure check-out lane light is on before starting to unload your cart

Cashiers have specific work hours and break times.  If their check-out lane light is off, they are either ending their shift or leaving for break. There is a lot of pressure to maintain scheduled shifts. Always ask the cashier if his or her lane is open if you are unsure. 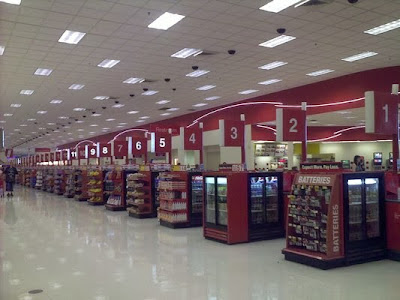 2. Organize your purchases on the track by how you want them bagged

If you want all of your cold food items bagged together or are buying three or more of the same item, put them near each other on the track. Also, a good cashier/bagger will try to distribute the weight so that the heavy things are on the bottom of the bag and the light things are on top.  Don’t force your cashier to reach for items or push others out of the way. It wastes time for both of you. 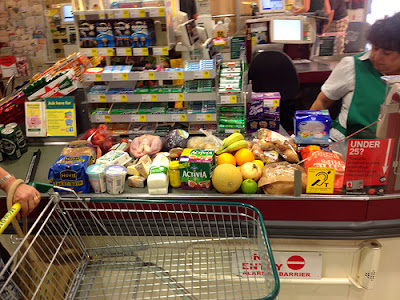 
3. Take your items out of the basket and put them on the track

This allows your cashier to sort your items and bag them correctly.  Having the customer empty the basket also saves the cashier time they could use scanning or bagging your purchases and getting you on your way.

During the holidays, more often than not you’re stuck in a line while waiting to check out.  If you’re buying clothes, please remove them from the hangers while you’re waiting. It truly saves so much time, and trust me, your cashier will be extremely grateful.

Big items take up a lot of space on the track and are heavy lifting for both you and the cashier. Leave them in the cart and let the cashier scan the barcodes with the scan gun. 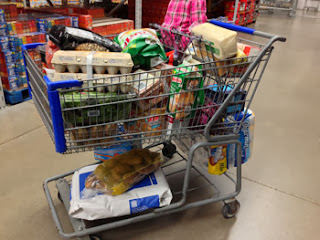 Arrange larger items so barcodes can be scanned with a gun5


Following these five simple suggestions should make your time in line and checking out go much smoother and much faster.  Happy Holidays!

Please share this blog with your friends and family.

Posted by On This Date in Minnesota History at 6:10 AM 1 comment:

On This Date in Minnesota History: October 31 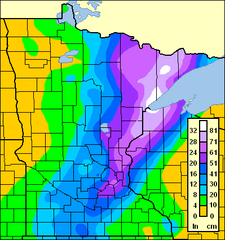 Snowfall totals for the Halloween Blizzard

On This Date in Minnesota History: October 30

October 30, 1917 – General William Gates LeDuc died in his home in Hastings, Minn., on this date. He was 94-years-old. LeDuc was a lawyer, the Commissioner of Agriculture under President Rutherford B. Hayes from 1877 to 1881, a general and quartermaster in the Civil War and an entrepreneur.

“’A Cottage in the Rhine Style’ is how Andrew Jackson Downing described his design for J. T. Headley’s Hudson highland rural home in his 1842 book, Cottage Residence, Rural Architecture & Landscape Gardening. Twenty-three years later, General William Gates LeDuc built a nearly identical home in Hastings. More a mansion than a cottage, LeDuc’s house portrays rural residential grandeur and symbolizes the man himself by its appearance of strength and refinement.

An attorney from Ohio, LeDuc settled in St. Paul in 1850, practicing law and running a bookshop. Soon after, LeDuc successfully represented a client involved in a land dispute at Vermillion Falls (now in Hastings). He was paid in land, and so began his lifelong attachment to the Hastings area. The construction of his house took many years, slowed by his absence in the Civil War and his ability to finance it from afar. By 1865, it was completed.

The house has ten fireplaces; its limestone walls are three feet thick and, except for the cherry staircase rail, all the woodwork is white pine finished at the site.”1

The home was added to the National Register of Historic Places on June 22, 1970, and is now a museum available for tours and rentals for special occasions. 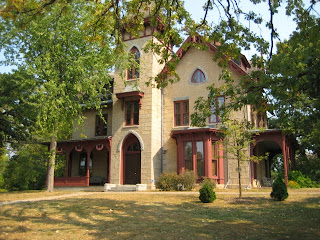 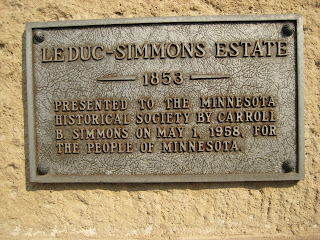 A “HISTORY OF MANIFESTATIONS:

The LeDuc family dabbled in spiritualism, especially General William Gates LeDuc and his daughter, Alice, who were heavily involved in its practices.  Perhaps they opened a door into the spiritual world.

[Daughters] Florence and Alice never married because of a lack of suitable young men [in Hastings], probably because they lacked the sizable dowry needed to attract upper-class suitors when they were young. The family was really close in life and loved their home, and had many fond memories of living and growing in this special place in their lives.

Carroll Simmons [a family friend who bought the home from the remaining family in 1941], loved the mansion and property and set up his antique shop on the first floor.  He made sure that the mansion and estate would pass into caring hands who would invest the money and time to keep the place up to snuff in its original glory and share it with the public in the form of a museum. After moving out in 1986, perhaps he missed the mansion so much that he decided to return!

In the 1950s, the LeDuc Mansion was reported as being haunted by several entities. Mr. Simmons added to that belief by keeping the mansion dark and spooky.  Staff today feel that they have friendly unseen hosts who keep the living company, while going about their business as well.

It is strongly suspected that the entity of General LeDuc, a restless man during life, is now a restless entity, puttering around his castle!

The entity of his devoted daughter, Alice, is thought to have stayed behind to keep watch over him, keeping him company.

It is also thought that a third entity of Carroll Simmons, has joined this pair.

Doors have been known to open and close by themselves, sometimes slamming.

Cold spots have been felt.

Objects sometimes are moved around a room.

Nothing has been done to drive them out as they are friendly entities who are benign and cordial, who still have the run of their beloved home when the museum closes. They are accepted as part of the museum.”2


Other Haunted Places in Minnesota:

On This Date in Minnesota History: October 29

October 29, 1971 – Born Winona Horowitz, actress Winona Ryder was named after the town in which she was born on this date: Winona, Minn. 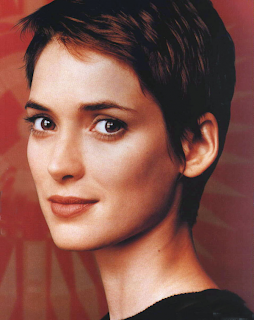 On This Date in Minnesota History: October 28

October 28, 1908 - The Minneapolis Journal reports that visitors are wearing down the exposed big toe of the Father of Waters statue in the rotunda of the Minneapolis City Hall and Courthouse. 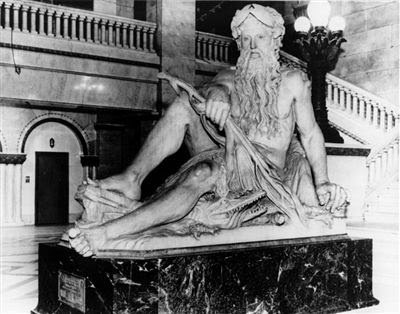 Father of Waters Mississippi, or the Father of Waters as he is better known, has graced the rotunda of City Hall and Courthouse since 1904. Sculpted from the largest piece of marble taken from the famed Carrara quarries in Italy, he weighs over 14,000 pounds.

On This Date in Minnesota History: October 27

October 27, 1849 – Itasca County, Minn., was established on this date, taking its “name from Itasca lake, which was named by [Henry Rowe] Schoolcraft in his expedition to this source of the Mississippi in 1832.” 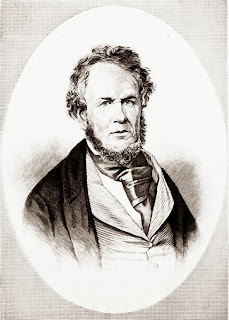