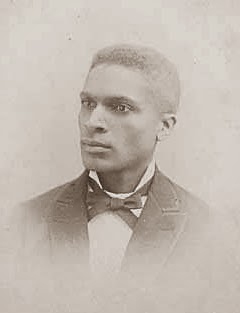 
I first encountered mention of Fredrick L. McGhee when I was researching the Nov. 19, 1903, stabbing murder of Salvadore Battalia on the Franklin Ave. bridge in Minneapolis (see Nov. 19, 2013, blog and Nov. 20, 2013, blog). Tony Calderone, the chief murder suspect, could not be located by the Minneapolis or St. Paul police. Then, on Nov. 21, an injured Calderone turned himself in to the Hennepin County sheriff, accompanied by his attorney, Fredrick McGhee, and Dr. V. D. Cooper, who had been caring for him since shortly after the attack. 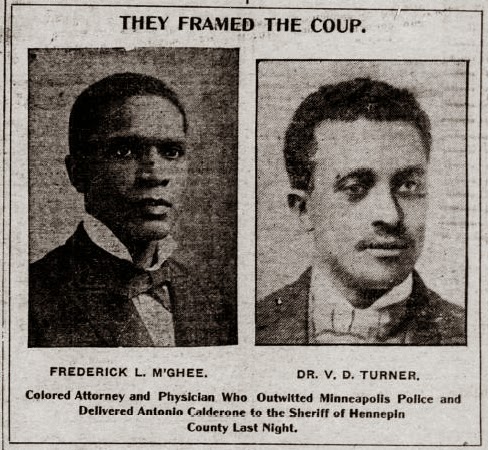 During the Calderone trial, the Twin Cities’ newspapers referred to McGhee simply as a “colored attorney,” but he was so much more. He was the first black lawyer admitted to the bar in Minnesota. Living in St. Paul, there was a small black population from which to attract clients, so McGhee primarily represented whites, gaining a reputation for competence and oratory. He was also the first African American lawyer admitted to the bar in Tenn. and Ill., and was considered one of the most highly skilled criminal lawyers of the Old Northwest. McGhee is also remembered as one of the founders of the Niagara Movement, the forerunner of the NAACP.


While McGhee won most of his cases, the Calderone trial was one of the few he lost. That may be because there was a twist revealed after Calderone was convicted of first degree manslaughter. Several “third men” had been suspected of participating in or witnessing Battalia’s murder, but no one was ever indicted. As it turns out, the real “third man” did not appear at the trail because McGhee refused to give in to the extreme demands made in exchange for producing him.

One evening shortly after Calderone’s arrest and long before his trial had begun, a visitor was announced at the McGhee home. This person, who was clearly an Italian, said he knew the identity and the whereabouts of the man who had gone with Tony Calderone and Salvadore Battalia to the Franklin Ave. bridge and had been a witness of the tragedy that happened in the early hours of Nov. 19, 1903.

McGhee assured his visitor that he would do all in his power to protect the prospective witness. It was then the mediator stated the terms on which he would produce the desired man: McGhee must give his little daughter as hostage for the man’s safety, the child to be returned when the witness had emerged unscathed from the trial and returned to his friends. This unique proposal left the attorney aghast. When he recovered his senses, he politely but firmly and understandably declined to endanger his child’s safety for his client’s.

McGhee was born the son of slaves in Aberdeen, Mississippi, in 1861. His father was a self-taught literate black slave, who passed his knowledge of reading and writing onto his three sons, Frederick being the youngest.

McGhee was able to attend Knoxville College in Tenn., and graduated with a degree in law in 1885. Although he began his legal career in Chicago, McGhee settled in St. Paul. In his law practice, McGhee once won a clemency from President Benjamin Harrison for a client who was a black soldier falsely accused of a crime.

“Frederick McGhee died at the age of 51 in St. Paul in 1912, victim of a blood clot which had migrated to his lung from a bruised or sprained right leg.”1 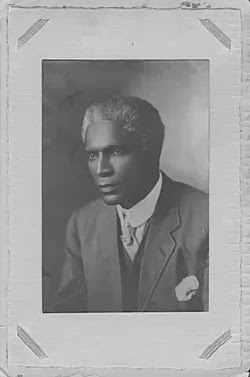 
St. Paul Dispatch; “Foul Crime Discovered, Horrible Murder of an Italian on the Franklin Ave. Bridge in Minneapolis, Twenty-one Wounds on Head and Body, Man is Identified as a Fruit Peddler in the Mill City.”; Nov. 19, 1903; P. 1.


St. Paul Dispatch; “Search for Murderer, Police of Opinion That Tony Calderone Killed Italian on Franklin Bridge, The Man is Missing from Usual Haunts, Discover of a Stilleto and Bloody Handkerchief Under the Bridge.”; Nov. 20, 1903; p. 19.


St. Paul Globe; “Murderer’s Blood Traced to St. Paul; Police Believe That The Assassination Of Salvadore Battalia in Minneapolis Was Instigated By The Mafia Society—Antonio Corodono , A Former Friend, Is Suspected of Committing The Crime.”; Nov. 20, 1903; p. 1.


Minneapolis Journal; “Demanded A Girl As A Hostage; F.L. McGhee Says Italian Offered To Surrender Third Man On This Condition. But The Attorney Declined to Part with His Daughter Thus. Calderone Seems Relieved That His Trial Is Over—He May Not Appeal”: Jan. 28, 1904; p. 1.

Posted by On This Date in Minnesota History at 6:10 AM No comments:

On This Date in Minnesota History: February 1 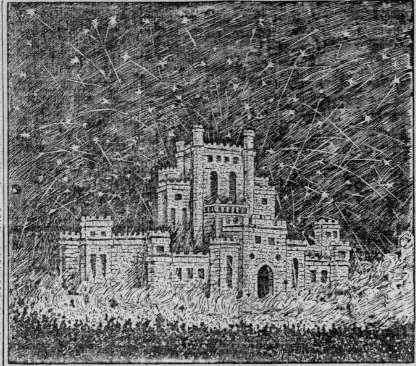 On This Date in Minnesota History: January 31

January 31, 1992 – “Emilio Estevez, along with a parcel of his co-stars, arrived in St. Cloud on January 31st, 1992, for two days of filming scenes for the movie Mighty Ducks. Producers looked at over 30 courthouses before picking Stearns County for this honor.” 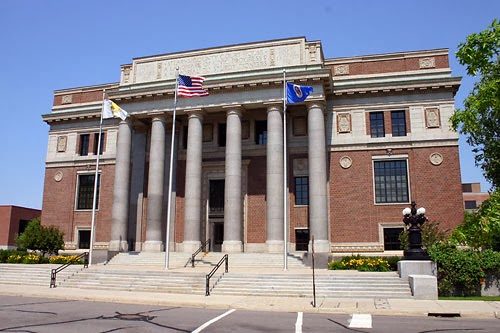 On This Date in Minnesota History: January 30

January 30, 1921 – “Five men were injured, two seriously, when a terrific blast caused by the explosion of a gas line rocked the plant of the Minnesota Steel corporation and demolished the power house [in] Morgan Park (Duluth) shortly after” 7 p.m.

“A fiery stream of gas shot out from the line at [a] defective coupling, which is thought to have been the breaking point. Workmen in the plant were thrown to the floor or driven to the wall by the impact of the explosion.” 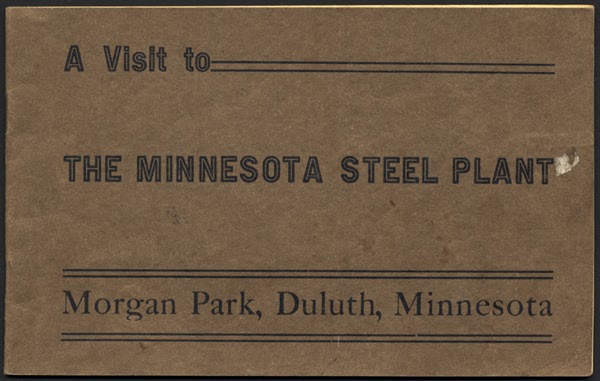 On This Date in Minnesota History: January 29 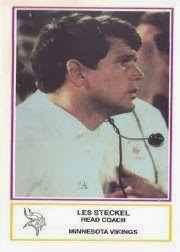 On This Date in Minnesota History: January 28

January 28, 1925 – One of the first four women elected to the Minnesota Legislature, Hannah Jensen Kempfer was also the first woman to serve as the honorary speaker in the Minnesota House of Representatives after being so appointed on this date. 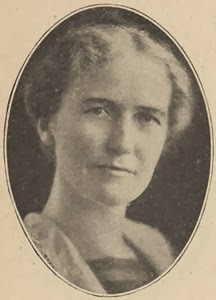 On This Date in Minnesota History: January 27

January 27, 1918 – Skitch Henderson, best known as “the original bandleader for The Tonight Show with founding host Steve Allen,” was “born on [this date on] a farm near Halstad, Minnesota.” 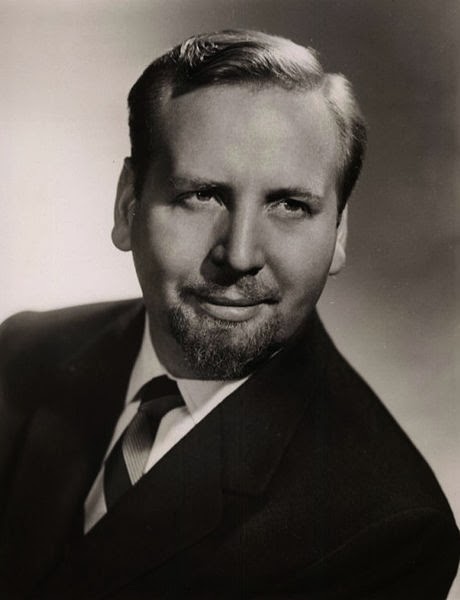 On This Date in Minnesota History: January 26

January 26, 1894 – The Minnesota Supreme Court, “holding that the law passed last winter regulating the commitment of insane persons to the asylum is invalid because it violates section 14 of the United States constitution” and also that “section of the state constitution that provides that no person shall be deprived of life, liberty or property without due process of law.”

As a result, at least 470 patients “who have been committed to the state asylums under the new law can, if their friends so elect, be taken from the asylums on writ of habeas corpus and returned to the counties from which they were sent for a second trial and recommitment” at the expense of the state. “Still another effect is that in all probability the friends of some of the patients could sue the superintendents of the insane asylums for damages on account of false imprisonment.”