On this date in Minnesota History: June 8

June 8, 1925 – “President Calvin Coolidge spoke to an audience of over 80,000 Norwegian Americans at the Minnesota State Fairgrounds [on this date]. He praised their contributions to American society and even acknowledged their claim that a Norwegian explorer actually discovered America long before Christopher Columbus. A local journalist reported the crowd’s response: ‘The great roar that rose from Nordic throats to Thor and Odin above the lowering gray clouds told that the pride of the race had been touched.’ Coolidge’s speech was a peak event of the four-day Norse-American Immigration Centennial Celebration, which drew nearly 200,000 Norwegian Americans from the United States and Canada.” 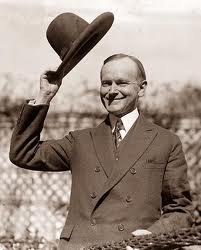 On this date in Minnesota History: June 7

June 7, 1902 – “The Thomas Wilson met her unusual fate on a calm, sunny day—just outside of the port of Duluth. With some of her hatches still open, the Thomas Wilson headed out of port, passing the inbound steamer George Hadley. Confusion over where the Hadley was to dock—the port of Duluth or the port of Superior—allowed the two ships to pass too close together. The captain of the Wilson, unaware of the nearby Hadley, ordered his ship to turn. But the Hadley took evasive action in the same direction, and the two ships actually turned into each other. After ramming into the Wilson, the Hadley pulled out of the wreckage and continued on its way toward Chicago. The Wilson tipped to port, righted itself, and then began to sink at its bow. Within three minutes the stern plunged under and the Wilson sank. Nine members of her twenty-man crew were lost.”
http://www.sciencebuzz.org/topics/titanic/learning_from_shipwrecks/thomas_wilson 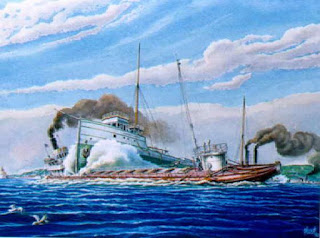 The wreck of the Thomas Wilson
http://www.sciencebuzz.org/image/thomas-wilson

On this date in Minnesota History: June 6

June 6, 1923 – A plaque memorializing Josias R. King, the first man in the U.S. to volunteer for the Civil War, was placed in St. Paul’s Union Depot on this date by the local DAR. The plaque has been located in the Minn. Territorial Pioneer Log Cabin on the Minn. State Fairgrounds since 1977. 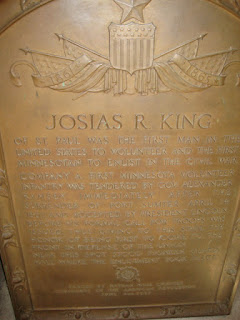 Josias R. King of St. Paul was the first man in the United States to volunteer and the first Minnesotan to enlist in the Civil War. Company A 1st Minnesota Voluntary Infantry was tendered by Gov. Alexander Ramsey immediately after the surrender of Fort Sumter, April 14, 1861, and accepted by President Lincoln before his formal call for troops was issued. Thus giving to this state the honor of being first to come to the front in defense of the Union. Near this spot stood Pioneer Guard Hall where the enlistment took place. 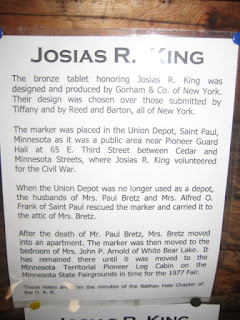 Josias R. King. The bronze tablet honoring Josias R. King was designed and produced by Gorham & Co. of New York. Their design was chosen over those submitted by Tiffany and by Reed and Burton, all of New York.

The marker was placed in the Union Depot, Saint Paul, Minnesota, as it was a public area near Pioneer Guard Hall at 65 E. Third Street between Cedar and Minnesota Streets, where Josias R. King volunteered for the Civil War.

When the Union Depot was no longer used as a depot, the husbands of Mrs. Paul Bretz and Mrs. Alfred O. Frank of Saint Paul rescued the marker and carried to the attic of Mrs. Bretz.

After the death of Mr. Paul Bretz, Mrs. Bretz moved into an apartment. The marker was the moved to the bedroom of Mrs. John P. Arnold of White Bear Lake. It has remained there until it was moved to the Minnesota Territorial Pioneer Log Cabin on the Minnesota State Fairgrounds in time for the 1977 Fair. 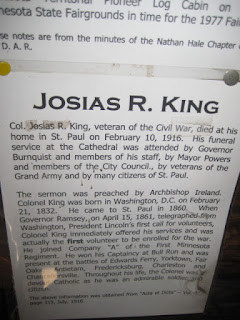 Josias R. King Colonel Josias R. King, veteran of the Civil War, died at his home in St. Paul on February 10, 1916. His funeral service at the Cathedral was attended by Governor Burnquist and members of his staff, by Mayor Powers and members of the City Council, be veterans of the Grand Army and by many citizens of St. Paul.

The sermon was preached by Archbishop Ireland. Colonel King was born in Washington, D.C., on February 21, 1832. He came to St. Paul in 1860. When Gov. Ramsey on April 15, 1861, telegraphed from Washington, President Lincoln’s first call for volunteers, Colonel King immediately offered his services and was actually the first volunteer to be enrolled for the war. He joined Company “A” of the First Minnesota Regiment. He won his Captaincy at Bull Run and was present at the battles of Edwards Ferry, Yorktown, Fair Oaks, Antietam, Fredericksburg, Charleston and Chancellorsville. Throughout his life, the Colonel was a devoted Catholic as he was an admirable soldier and citizen.


as long as acknowledgement included.

On this date in Minnesota History: June 5

June 5, 1964 – Alvin (DSV-2), a manned deep-ocean research submersible built by General Mills' Electronics Group in Minneapolis, Minn., was commissioned on this date. The vehicle is owned by the United States Navy and operated by the Woods Hole Oceanographic Institution (WHOI) in Woods Hole, Mass.

“The submersible has made over 4,400 dives, carrying two scientists and a pilot, to observe the lifeforms that must cope with super-pressures and move about in total darkness. Research conducted by Alvin has been featured in nearly 2,000 scientific papers.” It’s most famous expedition was the exploration of the wreckage of RMS Titanic in July 1986.
http://en.wikipedia.org/wiki/DSV_Alvin 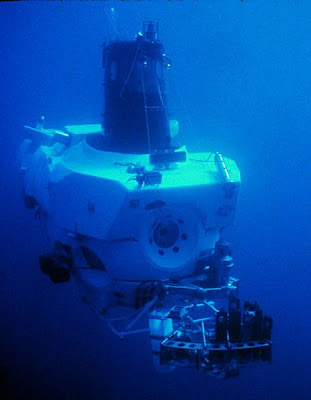 On this date in Minnesota History: June 4

June 4, 1993 – The City of Minneapolis held the formal dedication for the Jerry Haaf Memorial Parking Ramp located near City Hall. The ramp was named in memory of Minneapolis Police Officer Jerry Haaf, who was gunned down in 1992. 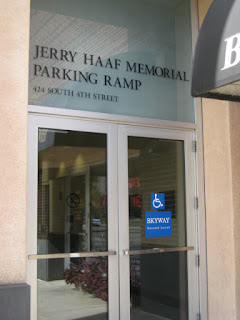 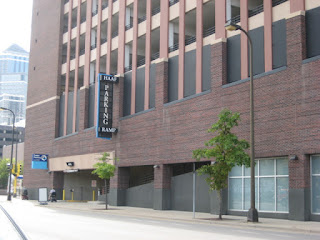 On this date in Minnesota History: June 3

June 3, 1990 – “President Bush and Soviet President Mikhail S. Gorbachev concluded their Washington summit with a joint news conference at the White House. Gorbachev and his delegation then flew to Minnesota for a whirlwind tour of Minneapolis-St. Paul.” 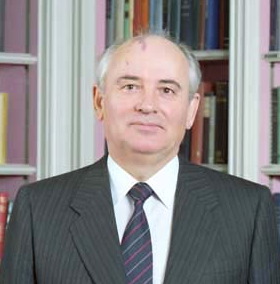 On this date in Minnesota History: June 2

June 2, 1907 – The corner stone for the current Cathedral of St. Paul (the fourth) was laid on this date. 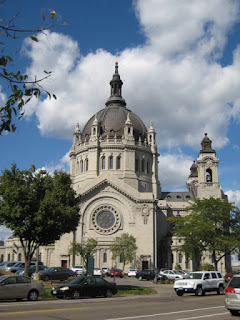 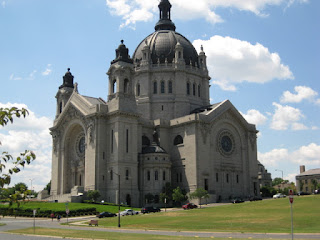