On This Date in Minnesota History: February 22

February 22, 1898 – The Duluth Chamber of Commerce, one of the largest and most costly buildings in the city, was partially destroyed by fire tonight. The origin of the fire is a mystery, and it gave the firemen a hard struggle before it was under control, owing to the fact that the building is in the form of two wings with a broad passage in the rear.

The building was supposed to be fireproof, but burned briskly in spite of the fact that 20 lines of hose poured ton after ton of water on it for more than two hours. At midnight the blaze was under control, but not until after the greater part of the interior had been gutted by the flames. The building is valued at $200,000, and as near as it is possible to find out, a line of insurance amounting to about $125,000. The loss is estimated at $50,000 on the building, and nearly as much more on the contents.

St. Paul Globe; “Big Zenith City Blaze, Chamber of Commerce Building Partially Destroyed, Loss on the Structure, Which Was Supposed to Be Fireproof, Fifty Thousand Dollars, and on the Contents Much More.”; Feb. 23, 1898; p. 1. 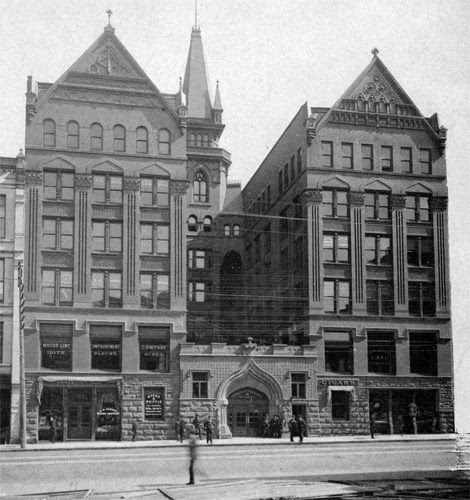 The Duluth Chamber of Commerce Building

http://zenithcity.com/wp-content/uploads/2012/04/ZCA_Arch_ManhattanBlock_001_DPL.jpg
Posted by On This Date in Minnesota History at 6:00 AM No comments:

On This Date in Minnesota History: February 21

February 21, 1871 – “The earliest record of settlers in the [Ham Lake] area goes back to 1855 when a number of [Scottish1] men were living in the southern portion.  They were mainly hunters.”2

“Ham Lake was a part of Grow Township [(now Andover)], but it was detached and separately organized by the Anoka County Commissioners on [this date].  The Scandinavian settlers found it difficult to pronounce [its then] Scottish name of Glen Carey.  Since no name had been chosen by the people, the commissioners named it “Ham Lake Township”, after the lake which had acquired that name due to its shape. 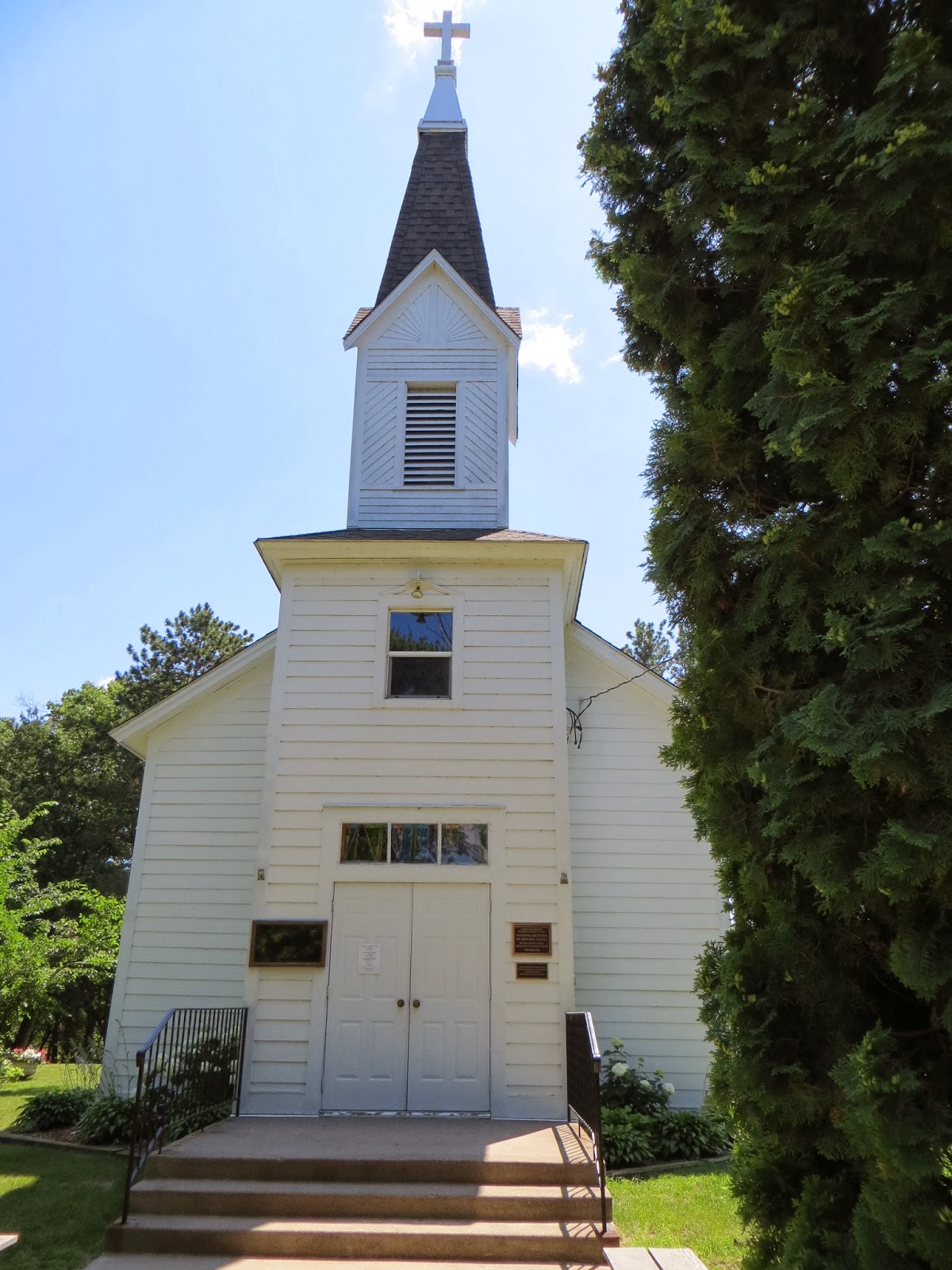 Religious meetings were held for several years by the Norwegian and Swedish pioneer families in private dwellings. Due to language differences each group decided to build their own church in the [mid-1870s].”2

In 1872, Swedish immigrants Johan P. Magnuson and his wife Fredrika donated land for the construction of the Swedish Evangelical Lutheran Church in Ham Lake, which was added to the list of National Register of Historical Places on December 26, 1979. 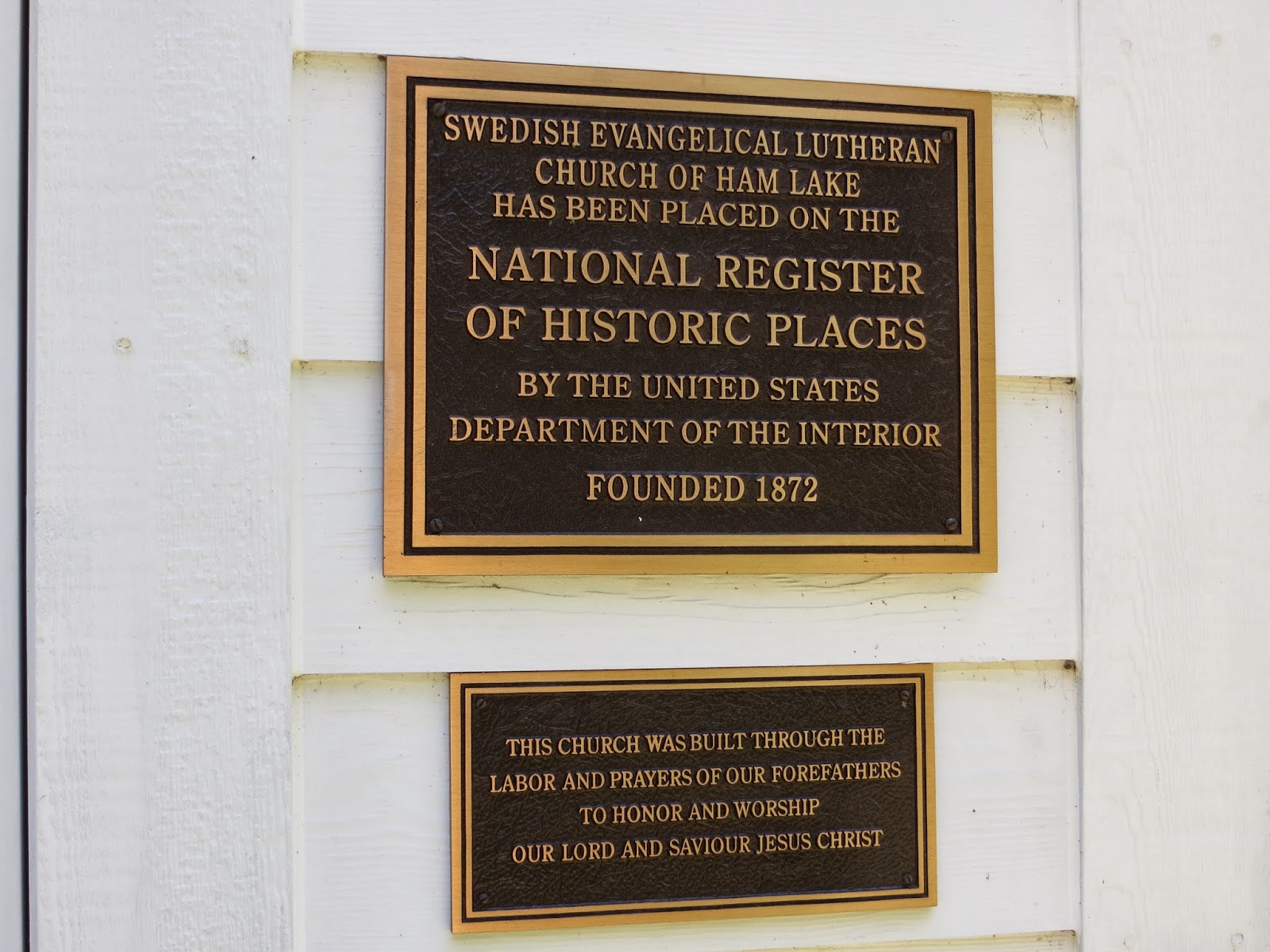 The following is the text of a plaque hanging on the front of the church:

"This church, the Swedish Evangelical Lutheran Church of Ham Lake as it is called on the National Register of Historic Places, has a rich history. Founded in 1872, the building was constructed on land donated by Johan and Fredrika Magnuson shortly after their daughters Alida and Emilia died of typhoid fever and a need for a cemetery was realized. Originally laid to rest in their front yard, when the church was completed the two coffins were moved and became the first graves in the cemetery.

When the church was first built there were no local pastors, thus, whenever the families in the church wanted to hold a service someone would have to travel to Anoka to pick up the pastor and bring him back. Since that time the church has expanded and required new buildings, but despite its now limited use, the "Old Church" remains an important part of the history of Our Savior’s Lutheran Church."3 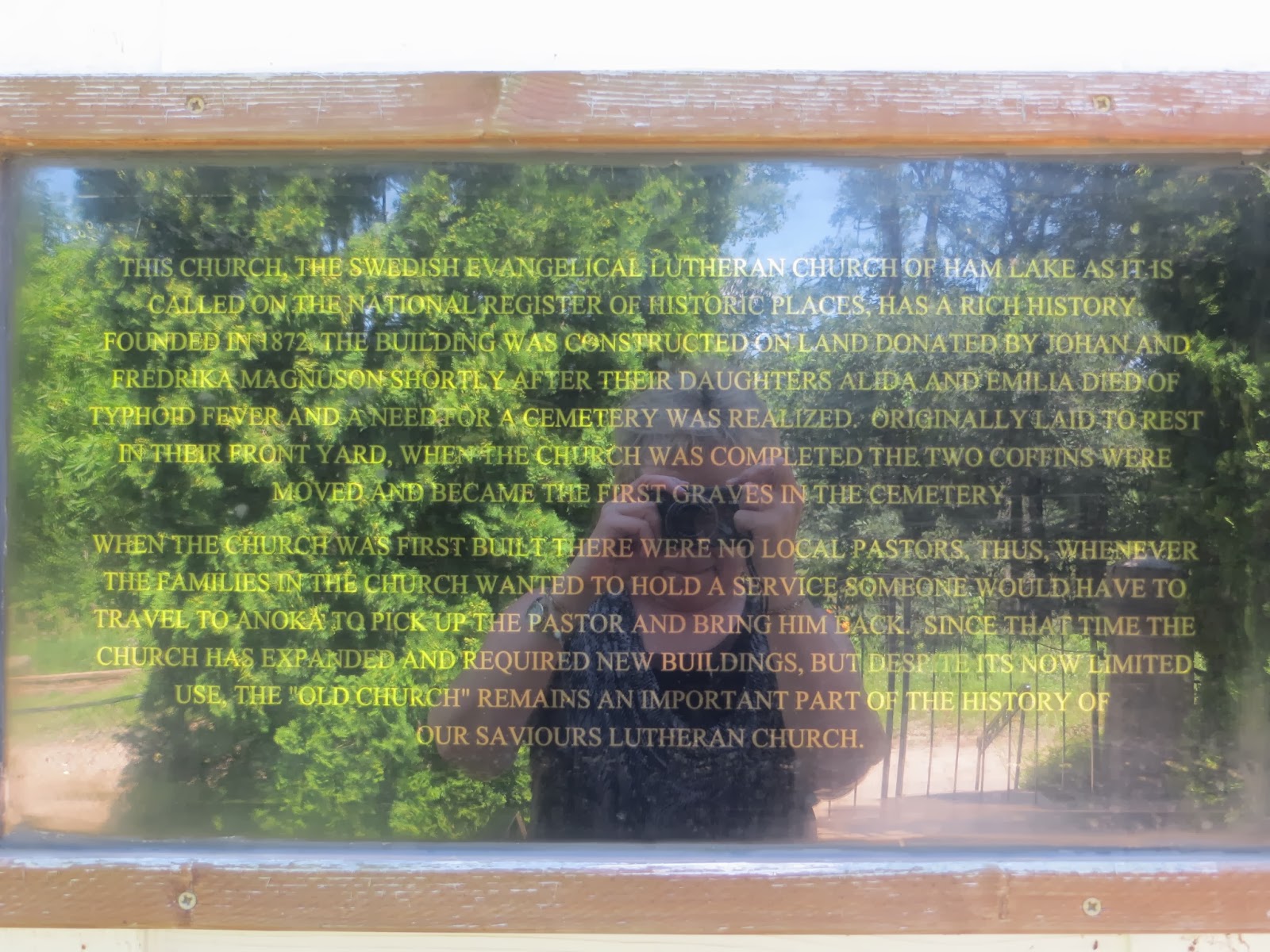 Today the church building on Swedish Drive in Ham Lake is called Our Saviour’s Chapel. Worship is conducted there on Christmas morning, the Sunday morning before Memorial Day, and Monday evenings at 7:00 p.m. throughout the summer (from the Monday after Memorial Day through the Monday prior to Labor Day).4

On This Date in Minnesota History: February 20

February 20, 1855 – Faribault County, Minn., was established on this date, and “named in honor of Jean Baptiste Faribault, who was engaged during the greater part of his long life as a trader among the Sioux, at first for the Northwest Fur Company. His influence with the Indian tribes west of the Mississippi, from the Missouri to the Red river, was very great. He endeavored to teach them agriculture, and was the first white settler to cultivate the soil in [Minnesota].” 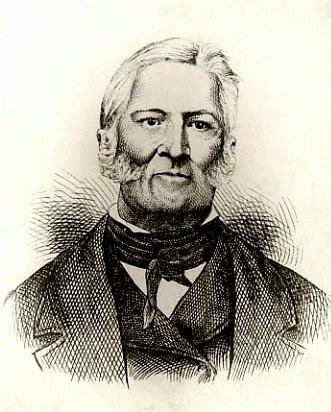 On This Date in Minnesota History: February 19

February 19, 1982 – The Roscoe Hersey House in Stillwater, Minn., was placed on the National Register of Historic Places on this date.  An “Eastlake/Queen Anne residence designed by George Orff, [it was] built in 1879-80 for a partner in [a] land, lumber, and mercantile company.” 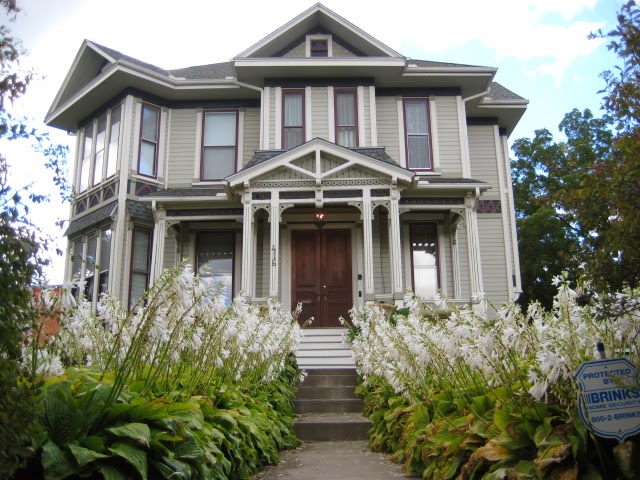 On This Date in Minnesota History: February 18

February 18, 1870 - Swift County, Minn., was established on this date. The “county was named after Henry Adoniram Swift, the governor of Minnesota in 1863.” 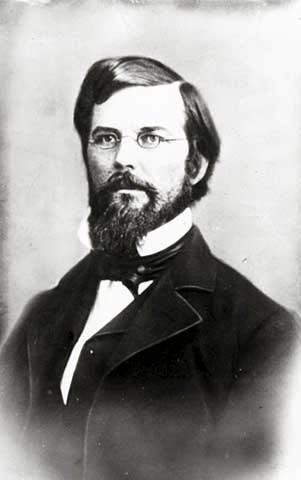 On This Date in Minnesota History: February 17

February 17, 1977 - Helen Voorhees Brach (born November 10, 1911), a widowed  American multi-millionairess whose wealth had come from marrying into the E. J. Brach & Sons Candy Company fortune, disappeared on this date in Rochester, Minn. and was declared legally dead in May 1984.1 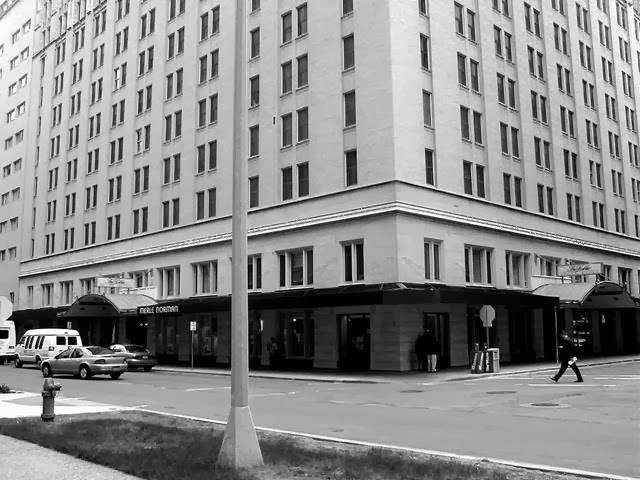 Bach was visiting “the Mayo Clinic in Rochester for a checkup. The doctors found her to be in good health, she paid her bill, checked out of her room at the Kahler Grand Hotel, made some purchases at a gift shop, and then left. This was the last time that [anyone saw] her.”2 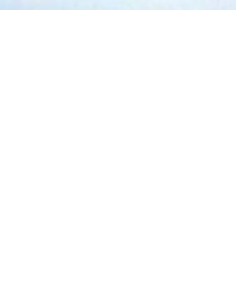 
“To this day, people report seeing Brach riding the elevators [in the Kahler Grand Hotel] and vanishing before their eyes.”2

Other Haunted Places in Minnesota:

On This Date in Minnesota History: February 16

February 16, 1978 – “Someone stole seven Norman Rockwell paintings that were on display at Elayne Galleries in the Minneapolis suburb of St. Louis Park. Together, the works were valued at more than $500,000. It was the biggest and most brazen art theft in Minnesota history. The case was never solved, but the paintings were eventually recovered after turning up in the collection of an art dealer in Brazil.”1

“In 1999, the FBI recovered two of the stolen paintings, ‘She's My Baby’ and ‘A Lickin' Good Bath’ when they were left with a Philadelphia art dealer on consignment.”2 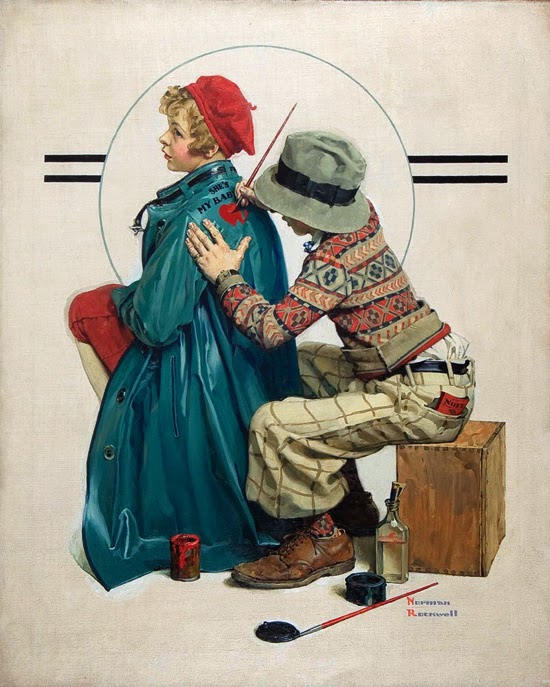 On May 10, 1927, the movie She's My Baby, about a couple whose blissful marriage turns sour but is later saved, debuted. At the time, Rockwell's marriage with his first wife, Irene O'Connor was disintegrating, which may have inspired him to use the movie title for his June 4, 1927, Saturday Evening Post cover. The figures in She's My Baby belong to children but the hands and feet of the boy seem to have been posed for by Rockwell himself, suggesting identification with the boy.

Rockwell creates a variety of textures and patterns that lead the viewer's eye from the paint brush, to the heart symbol, and to the girl's face. The sheen on the girl's raincoat and curls is contrasted by the rough shoe leather and velvety hats. Along with the new coloring process used to print magazines, Rockwell was able to use color to offset the characters with complimentary shades.”3