On this date in Minnesota History: June 16

June 16, 1931 - While leveling what engineers had labeled "frost boil five" on U.S. Highway 59 near Pelican Rapids, Minn., a highway department crew discovered the skeletal remains of a woman that Dr. Albert Jenks from the University of Minnesota determined to be at least 10,000 (possibly as much as 20,000) years old. “At least two artifacts -- a conch shell pendant and a dagger made from an elks' horn -- were discovered with the bones.

Prior to 1926, most scientists believed human beings' appearance in North America dated from about the last couple thousand years. The discovery of what was to become known as ‘The Minnesota Man’ (the name officially changed in 1976 to ‘The Minnesota Woman’) pushed the date even beyond that, back further than many were willing to concede.

But eventually, the evidence became irrefutable. Science now recognizes this Minnesota Girl (who is sometimes referred to as ‘Lady of the Lake’), as a proto-Indian, a member of a race who lived virtually in the shadow of glaciers at the end of the last Ice Age. Her forebears had come from east-central Asia, perhaps by walking across the Bering Straights on ice, perhaps on a ‘land bridge’ exposed by lower sea levels. Retreating glaciers left a band of rich alluvial soil at their bases, upon which grew lush grasses to feed great herds of bison, elk, perhaps wooly mammoths, as well. And wherever there was game, there were bands of pre-historic hunter-gathers.

Thus Otter Tail County may claim to have been the home of one of the first human beings to have lived on the North American continent during the Pleistocene Epoch age. If scientists are correct, this Pelican Rapids teenage girl dates back beyond the days of the Pharoahs of Egypt, and beyond the written history of humanity.” 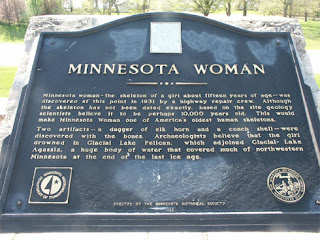 Minnesota Woman – the skeleton of a girl about fifteen years of age – was discovered at this point in 1931 by a highway repair crew. Although the skeleton has not been dated  exactly, based on the site geology scientist believe it to be perhaps 10,000 years old. This would make Minnesota Woman one of America’s oldest human skeletons.

Two artifacts – a dagger of elk horn and a conch shell – were discovered with the bones. Archaeologists believe that the girl drown in Glacial Lake Pelican, which adjoined Glacial Lake Agassiz, a huge body of water that covered much of northwestern Minnesota at the end of the last ice age.


Posted by On This Date in Minnesota History at 6:00 AM